Spirits of the Sky by Nicola Henley

Spirits of the Sky soar in new exhibition

The movement of birds in the environment is hauntingly captured in Spirits of the Sky, a new exhibition opening at Newcastle’s Timeless Textiles Gallery in February.

Artist Nicola Henley drew inspiration for the soaring images in her Spirits of the Sky exhibition from studying birds and their flight, with particular reference to the sky, air currents and changing light in different locations.

Many of the exhibition pieces derive from time she spent at an artists’ retreat, Cill Rialaig in County Kerry, Ireland. The converted crofters’ cottages are perched on the edge of a rocky, heather-covered peninsular, which juts out into the Atlantic sea, offering unique artists’ studios where sky and sea meet.

“This wild setting offered me time to sketch the ever-present gulls, soaring over a wide stretch of the Atlantic, backed by the rugged landscape,” Nicola said. “The area has a humbling and majestic beauty. When I’m there I reflect on the spiritual life of the ancient monks who spent periods in the early centuries, living in extreme, isolated conditions on the nearby Skellig Islands, which dominate the horizon as they rise dramatically out of the sea, eight miles off shore.”

The works in Spirits of the Sky were also influenced by Nicola’s visits to Dublin’s National Gallery, to study William Turner’s watercolours.

“His mastery of colour and brush marks, suggesting the changing light over seascapes and mountains, fill me with inspiration,” she said. “Attempting to create these textures with dyes and pigments on fabric is a challenge!”

Nicola has effectively captured Turner’s sense of scale and freedom with hints of detail by repeatedly printing, painting and stitching the surface, washing, steaming and ironing, to build multiple subtle layers, representing birds moving in their natural environment…like Spirits of the Sky.

Spirits of the Sky exhibitions runs from 15 February until 12 March, with the opening at 6-8pm on 16 February. 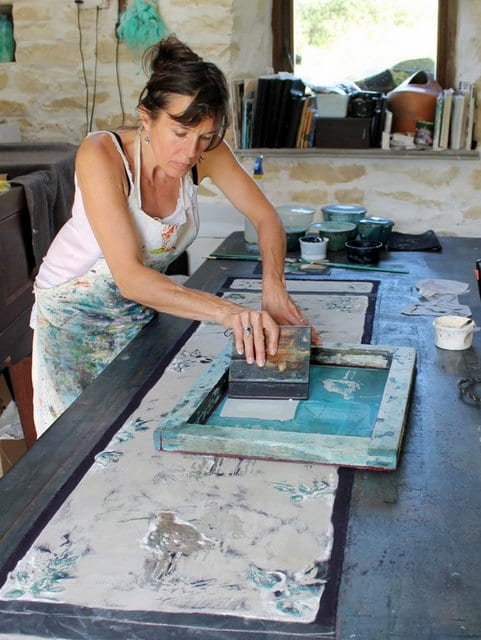 Find out more about Nicola

All of the day