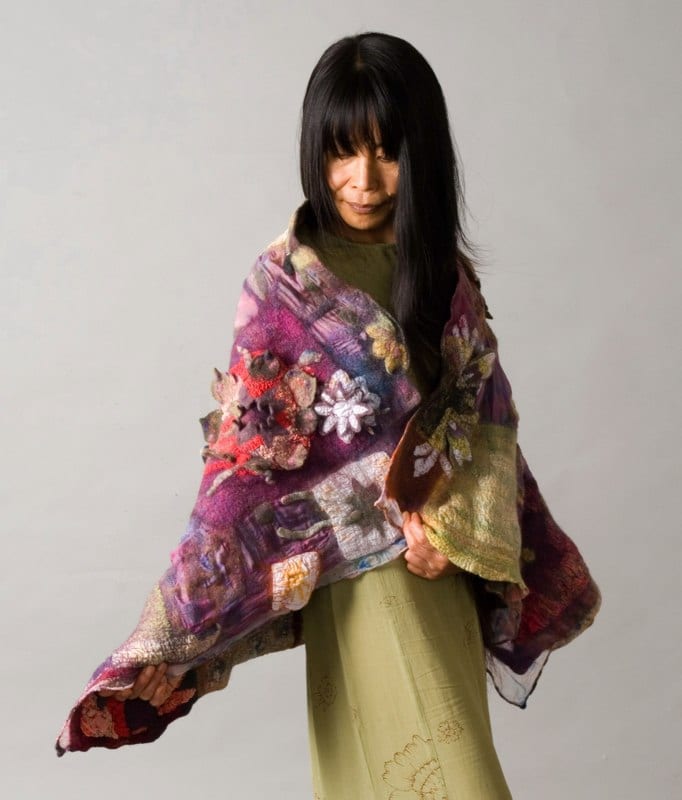 I’m a multimedia artist currently living in Lismore. I have been making felt since 1994 and after practising the art for nearly 2 decades, feltmaking has became one of my many mediums. Also ‘art’ has became for me ‘about creativity’! I like to be inventive and I have been developing new techniques – and combining different methods to achieve unique expressions and exciting and unexpected works. I can’t help pushing boundaries of feltmaking and I always seek a happy accident!

I worked as one of the members of Polly Stirling’s ‘Wild Turkey Feltmakers’ and since I involved in developing ‘Nuno-Felt’ technique with her in 1995, I have developed my own original and unique methods – ‘Calamari-Felt’ and ‘Wild Turkey’s Nest-Felt’ – in 1996.

I have also developed their various variations since then and I have run some local workshops while I studied at the local TAFE and university, my degree (BA painting major) and advanced diploma in visual art as well as many other courses and exciting workshops. Teaching felt workshops have became a part of my art practice. I developed ‘Orikiri-Felt’ technique in 2009 for teaching it in NY and Connecticut states in the US in 2010.

I also taught ‘Orikiri-Felt’ workshops at the local (Blue Knob Hall) gallery, ‘Nuno-Felt’ Workshop at local TAFE and ‘Complex Felt – Beyond Boundaries of Feltmaking’ Workshop at Fibres Geelong 2010 (Fibre Arts Australia) at Geelong (VIC) last year as well. I have taught my first ‘Weft-Felt’ Workshop for the group of Fibre Artists Network Inc at Gladstone (NSW) in June and I also taught the same workshop at the local gallery in June/July this year.

The page you requested could not be found. Try refining your search, or use the navigation above to locate the post.